The “Many Benefits of Business Jet Ownership” is something that is very clear to successful entrepreneurs like Wayne Gorsek. Having a trained pilot like Dave Coffman on standby gives the business CEO even more flexibility to really concentrate on what they do best and still have the flexibility they need. Let me share with you his story.

Wayne Gorsek dreamed of flying as early as his elementary school years. He was adopted and raised by his grandparents. His grandfather, Fred Gorsek Sr. worked at Scott Air Force Base in Belleville, IL. He would have his grandfather take him to the library to check out books to study about aviation, the US space program and the US Air Force. 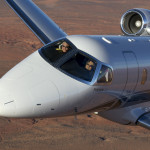 Wayne enrolled in the Civil Air Patrol and planned to enter the USAF. Instead, he ended up going the entrepreneurial route and founded Vitacost.com, an online vitamin company, in 1994. During this time he earned his private and multiengine ratings and bought his first airplane, a Rockwell Commander 112 single and later a Cessna 310Q twin. When Wayne founded Vitacost.com it became apparent it was going to take quite a few years of low pay and losses before he could build sales high enough to reach profitability. As a result, he sold his Cessna 310Q with the dream of one day becoming type-rated, owning and operating his own business jet. It took Wayne quite a bit longer than he expected, but in 2008 he bought a new Diamond Twinstar DA-42 to earn his multi-engine and instrument ratings and become familiar with the Garmin G1000 avionics.

After 15 years in operation, Wayne took Vitacost public in 2009 as the largest shareholder and Chief Operations Architect. Under Wayne’s leadership, Vitacost earned INC 500 Hall of Fame and became the #1 online vitamin company in the world. At the time of the IPO, Vitacost was shipping over three million orders per year, had revenues of about $200 million per year and had created over 300 American jobs. In December 2009, a few months after the IPO, Wayne earned his Embraer Phenom 100 single-pilot type rating and took delivery of a brand new Phenom 100. I first met Wayne when he contacted me to fly as his mentor pilot in his new Phenom. This gave Wayne the opportunity to operate the aircraft in a “real world” environment of advanced mentoring well beyond what is available via simulator based training. Wayne knew that moving up from a light piston twin to a high performance and advanced business jet could be intimidating, and flying with a qualified mentor pilot would provide for an outstanding training and confidence building experience. Flying into an unfamiliar airport at night or in weather for the first time in the actual aircraft can be intimidating, but having a qualified mentor pilot along can quickly build confidence by providing positive reinforcement. An unexpected turn of events occurred in December 2009 that was very similar to what happened to Steve Jobs in the 1980s at Apple after their IPO occurred at Vitacost.com. The Board of Directors forced Wayne to retire from the company he had founded for no stated reason. Interestingly and maybe not surprisingly, Vitacost.com has gone from multimillion dollar profitability in 2009 to over $34 million in total net losses to the end of Q1 2012.

Wayne used the opportunity of his “retirement” to attend CAE Simuflite in Dallas, TX along with myself (in fact we were the only two in the class) to earn his Phenom 300 single-pilot type rating and then took delivery of a new 2011 Embraer Phenom 300 at the Embraer Factory in Brazil and flew the aircraft to the USA. Wayne particularly enjoys the Phenom 300 as it provides for almost twice the range of about 2,000 NM at full fuel with a useful load that is double that of the Phenom 100 plus a 80+ knot higher cruise speed in 420 kt range at FL410 – 450 and with a top speed of 453 knots. Also being able to climb to FL 450 allows Wayne to top more dangerous weather and mountain wave turbulence not to mention cruise out of the RVSM congested flight levels. The Phenom 300 also has a superior pressurization system keeping a 6,600 foot cabin at FL450 and ultra-efficient 3,360 lbs per side of thrust Pratt & Whitney engines that provide a total fuel burn of only about 850 pounds per hour whereas other older and less efficient jets can burn double this amount. 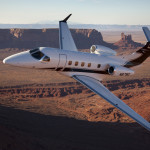 Being the consummate entrepreneur, Wayne decided to launch a new superior nutritional company in 2011 based on cutting edge science and state of the art manufacturing equipment related to vitamins, herbs and natural health products. Wayne founded Las Vegas Nevada based www.drvita.com, and just as his previous company, the operations are 100% U.S. based including manufacturing and customer service. Wayne expects this new business venture will create hundreds of full time employment opportunities with excellent compensation and benefits to provide his customers with the best quality and service possible. Wayne has integrated the capabilities of his business jets, the Phenom 100 initially, and now his more capable Phenom 300 to rapidly travel to meet with raw material, equipment and other suppliers located all over the USA. What would typically be a painfully time consuming multi-day trip using commercial airlines plagued with delays, cancellations, oversold flights and worse becomes an enjoyable and productive same day trip. The power of business aviation provides Wayne a level of safety, efficiency and security impossible via commercial airlines. Wayne’s next goal is to make www.drvita.com the #1 online vitamin company in the world, just as he did with Vitacost, and upon this accomplishment to upgrade his Phenom 300 with a new Embraer Legacy 500.

Now you can see “The Many Benefits of Business Jet Ownership” in Wayne Gorsek Entrepreneur’s story. There are many benefits to owning your own jet and if you are looking for a safe, qualified and friendly pilot for your flights contact us;

Dave Coffman invites your feedback via the comment section below.

Dave began his flying career at 16 and earned his Private Pilot’s license shortly after his 17th birthday. He graduated with Honors from Florida Institute of Technology with a B.S. in Air Commerce Flight Technology and later completed his Masters Degree in Aeronautical Science from Embry Riddle University. After graduation he joined the Air Force through Officers Training School and later completed pilot training at Reese AFB, TX. He was selected to the fly the F-16 at Torrejon Air Base, Spain with the 614 Tactical Fighter Squadron “Lucky Devils”. Dave served 23 years in the active Air Force and Air Force Reserve retiring as a Lt Colonel. His assignments included operational F-16 units in Europe and the United States as well as an assignment as a T-37 Instructor Pilot at Columbus AFB, MS where he served as the Assistant Chief of the 14 Flying Training Wing’s Standardization and Evaluation Division. He commanded the 39th Flying Training Squadron, Moody AFB, GA, the Air Force Reserve’s first associate Joint Primary Aircraft Training System unit employing both the T-6 and the AT-38 jet trainer as well as a tour flying the lead solo #5 F-16 aircraft with the Air Force Demonstration Squadron “Thunderbirds” where he flew over 150 air shows in all 50 states as well as in Europe and South America before millions of spectators including the President of the United States, Secretary of State and numerous heads of state. His awards and achievements include the Distinguished Flying Cross, Meritorious Service Medal and Air Medal with Oak Leaf Cluster and Top Graduate of his Pilot Instructor Training class. Additionally, he was the awarded the Air Force “Pilot of Distinction Award” for his recovery of an F-16 during an air show after a catastrophic afterburner explosion. He is an ATP rated pilot as well as a CFII/MEI. He has over 5,000 hours of flight time and over 1,200 hours instructing in jets, with type ratings in the Embraer Phenom 100 and 300 as well as the Citation Mustang (CE-510S). Please feel free to contact Dave at 904-631-0153, or via email dave@highercallingaviation.com